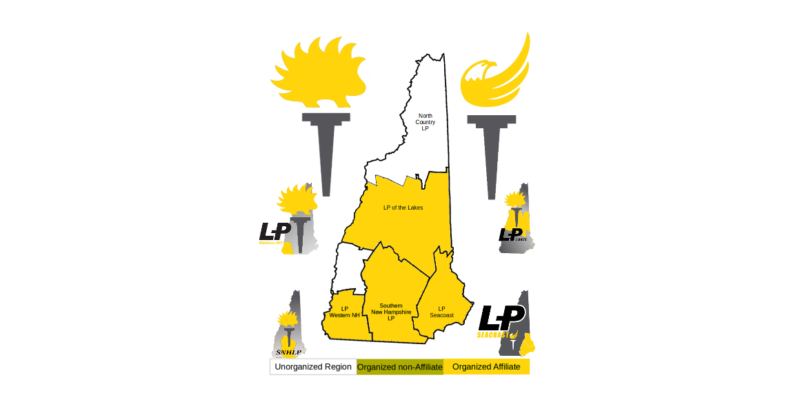 The LPNH Executive Committee on July 23, approved the affiliate application from the newly formed Libertarian Party of the Lakes Region NH, which is comprised of the entirety of both Belknap and Carroll Counties, and Grafton County (except for the towns of Bath, Bethlehem, Franconia, Lisbon, Littleton, Lyman, Monroe, and Sugar Hill). Tony Jankowski was elected Chair of the LP Lakes affiliate during their organizational meeting on July 19.

LP Western NH, which was officially organized on February 18, held their Annual Meeting on August 12. During that meeting the members voted to amend the bylaws to reduce the number of officers from 5 to 3, and voted to consolidate the region to only include Cheshire County. Darryl W. Perry (LPNH Chair) was re-elected Chair of LP Western NH, after having served as interim Chair since the organizational meeting in February. The membership of LP Western NH submitted a petition for affiliation to the LPNH EC immediately following their Annual Meeting, that application was approved on August 19 by a vote of 5-0.

The Southern NH Libertarian Party held an organizational meeting on May 18 at which the membership adopted bylaws and elected an Executive Committee with Jim Grenier being elected Chair. Their affiliate application was received by the LPNH Executive Committee on Sept 14, and was approved by a vote of 5-0.

The LPNH Membership Committee is working on organizing the remaining parts of the state (North Country and Upper Valley) into regional affiliates, with a goal of having regional affiliates for the entire state before the 2018 state convention.

Join us Now!
See Our Billboard?

Click Here to Read Why We Oppose Fascist Covid Mandates