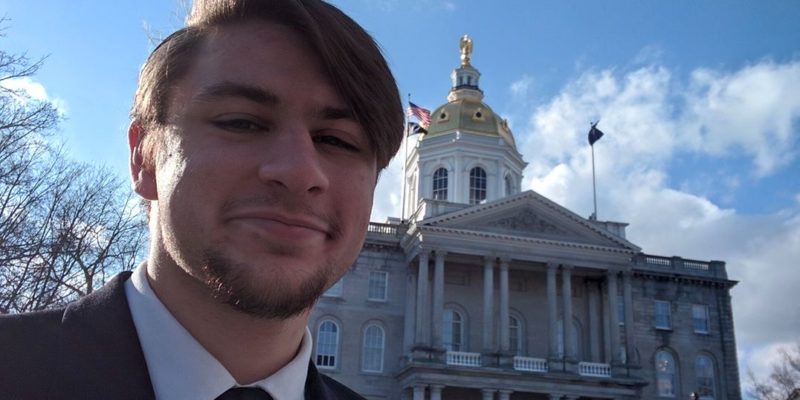 “Dyer is a fine example of the rare legislator who confidently puts their principles first and foremost,” said Darryl W. Perry, LPNH Chairman. “I welcome Dyer into the Libertarian Party with open arms and hope that by 2018, the NH Legislature will once again have an officially recognized Libertarian Caucus.”

Dyer lives in Pelham and represents Hillsborough 37. “I believe that it is time to demonstrate to the people of New Hampshire that such a duopoly of partisan interest, which presently controls this House, is not in their interests,” said Dyer in a prepared statement at a press conference at the Capitol. “In order to ensure the adequate representation…I truly believe the best course of action is to organize outside of the party and force coalition.”

Dyer is a lifelong resident of his district, a 2015 graduate of Alvirne High School, and was first elected in November 2016. During his 2016 campaign, Dyer was endorsed by both the NH Liberty Alliance and the Republican Liberty Caucus of NH.

“Representative Dyer is fighting for the libertarian policies that maximize individual freedom by reducing big government,” said National Libertarian Party Vice Chairman Arvin Vohra. “We thank him for the incredible courage he is showing by formally joining the Libertarian Party.

The LPNH announced that Dyer will be a featured speaker at their annual convention which will take place on March 18, 2017 from 2 p.m. – 9 p.m. at the Holiday Inn in Concord.  The key note Speaker will be Carla Howell, President of the Center for Small Government. Tickets can be purchased at LPNH.org

For more information, please visit LPNH.org or find us on facebook.